Who is responsible for regulating hate speech online? - r0g agency Skip to content 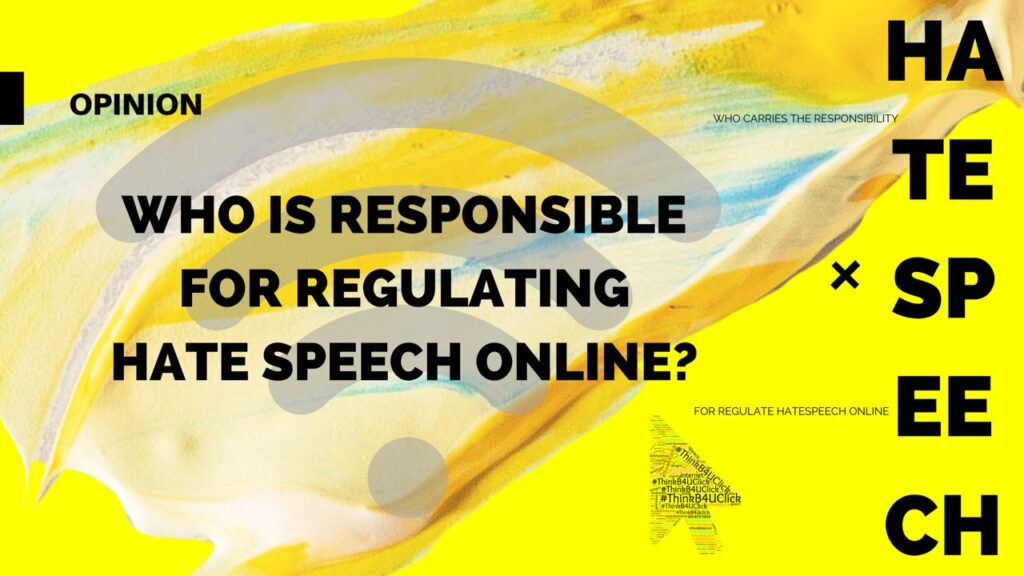 Hate Speech is as difficult to define as it is to regulate. There is no international consensus on what is considered hate speech and what isn’t. The difficulty with regulating hate speech is that it sometimes infringes on the freedom of speech, which is a right defended by international law. In the absence of a universal definition however, hate speech is a universal problem that has become ever more present with rapid developments in media and communication technology. It is important to note that hate speech is not an isolated issue that affects just a few communities or just a few loud voices. The problem of hate speech is not merely linguistic as research has linked hate speech on and offline directly with violence on the ground. In several cases including, Rwanda (1994), South Sudan (2013) and more recently Cameroon (2016),  hate speech has been instrumental in inciting, fueling and encouraging or condoning violence, hatred, abuse. Easy access to the internet today means “Social media and other forms of communication are being exploited as platforms for bigotry”. Hate speech poses a threat to all that democratic values, social cohesion, peace, social stability and respect for humanity hold dear. In the face of this growing threat therefore, “Silence can signal indifference to bigotry and intolerance, even as a situation escalates and the vulnerable become victims.” (UN, (2019, May). The question one is tempted to ask in this volatile environment is therefore, who’s voice should be heard? Who should define and regulate hate speech? What are the challenges?

For the purposes of this discussion, we will define Hate speech as “abusive or threatening speech or writing that expresses prejudice against a particular group, especially on the basis of race, religion, or sexual orientation.” Who therefore is responsible for dealing with such type of speech online?

The world has become a global village, and language as well as hate speech has no true barriers especially with the internet. Someone sitting in the comfort of their homes in Belgium is able to incite thousands to violence in Cameroon. In such a global and interconnected environment, there is a need for universal regulations to regulate hate speech.

3 December 2003, three people were convicted of crimes against humanity based on speech that the International Criminal Tribunal for Rwanda (“ICTR”) considered “incitement to racial hatred, but not incitement to racial violence.’ In the court’s judgment, “hate speech that expresses ethnic and other forms of discrimination violates the norm of customary international law prohibiting discrimination.”2 The tribunal based its holding on international and domestic law which it believed established a customary international law (“CIL”)prohibiting hate speech.” Cohen, Roni (2014).

Already, major international covenants have been drafted and signed by a couple of countries that grant the right to free speech but limit such speech when it is hateful. Some of such conventions that translate to international law on hate speech include: the Universal Declaration of Human Rights, the International Covenant on Civil and Political Rights, and the European Convention of Human rights amongst others. International law however comes with its own limits, amongst which include the need to respect sovereignty,  a lack of uniformity in definition and enforcement amongst and within states, the absences of a strong legal obligation or enforcement amongst others. Observing the inadequacy of international law, the brunt of regulation falls on:

A few years ago, a participant at a #defyhatenow event in Yaounde stated, “if hate continues, the first guilty is the…state that doesn’t regulate the use of media”. Compared to international law, it is easier for the state to create and enforce laws around hate speech. In several countries, laws to deal with hate speech  have been passed and many other countries, the laws are still a work in progress. In recent years however, as Antonio Guterres noted in 2019, “Hate is moving into the mainstream – in liberal democracies and authoritarian systems alike.”(UN, (2019, May). Most human rights groups have thus noted that, with authoritarianism on the rise, hate speech laws are being used as a way to silence critics. Governments have used these laws and an abuse of power to shut down the internet and limit the media as what was experienced in Cameroon. A case in point is Ethiopia, following the recent turbulence in the country, the government responded with a law many fear “gives the government and security forces the ability to track down and punish opposition voices.” while the “ Authorities justify this as fighting hate speech online.” (Cascais, A. (2020). In this atmosphere of distrust and suspicion, the hot baton is passed to:

Used broadly to include, social media sites, print media, TV and radio and any other form of media production. These play an important role in the lives of citizens and governing of any state. Technology and media have become both very decisive and divisive in both conflict and peacebuilding. We have recently seen how much technology can be used to incite violence in with the storming of the Capitol Hill in 2021 (Barrett, T., Peter, R., & Nickeas, P. (2021, January 6), the role the media played in both inciting and organizing this unfortunate event that led to loss of lives. In response to this, Twitter and other social media profiles banned Donal Trump’s accounts citing incitement to violence (Twitter Inc. 2020, January 1). Social media websites like Facebook, Instagram, Twitter, YouTube, WhatApp and others have community guidelines regarding hate speech and how to anonymously report this sort of speech online. More than anything else, the responsibility these media companies bear to the individuals they serve compels them to this task. It is however not always very apparent for these sites to identify and deal promptly with hate speech and incitement to violence (In the case of the Capitol Hill for example, Trump’s Twitter account only got banned after the fact), this is because, their definitions of hate speech often vary and is limited to say the list, and they depend on independent reports from users to properly deal with and regulate hate speech.

It is easy to feel lost in all this confusion, the truth however is that, the most affected people by hate speech are you and I, the individual citizens, the everyday Mary and John. Every single one of us is a potential victim, regulator or reproducer of hate speech, we are always just a few words or clicks away.

Remember #defyhatenow event mentioned above?  At the same event, another participant said, “It’s cowards who make hate statements on social networks…in real life, they cannot”. Private individuals have the agency to regulate hate speech: the first way is by not speaking, publishing or sharing it in the first place. The second is by speaking up or reporting hate speech on social media, (look at the #defyhatenow Field Guide for how to report hate speech online). Sometimes however, individuals do not have the resources and competences to deal with hate speech properly and for this, they often require the support of:

These organisations and initiatives such as #defyhatenow are forge strong partnerships between the governments and citizens in addressing hate speech and incitement to violence. CSO’s often have expertise and adequate resources and often are endowed with a critical independence that permits them to deal with hate speech with the impartiality it requires. They however always require the collaboration and support of the state and citizens to do this crucial job.

In truth, None of these parties discussed here can regulate hate speech alone. It takes all these stakeholders in all levels working tirelessly everyday to regulate hate speech. It takes us all and more to change the narrative. Maybe we had the wrong conversation here, maybe the question we should all be asking ourselves is “where is the love?”, it is our duty therefore to make love, peace, respect, hope, tolerance, honesty and transparency the narrative not just the counter narrative. Follow #defyhatenow on social media, engage with our conversations and visit our Hate Speech Mitigation Field Guide for more on how to deal with Hate Speech.  Facebook, Twitter, Instagram