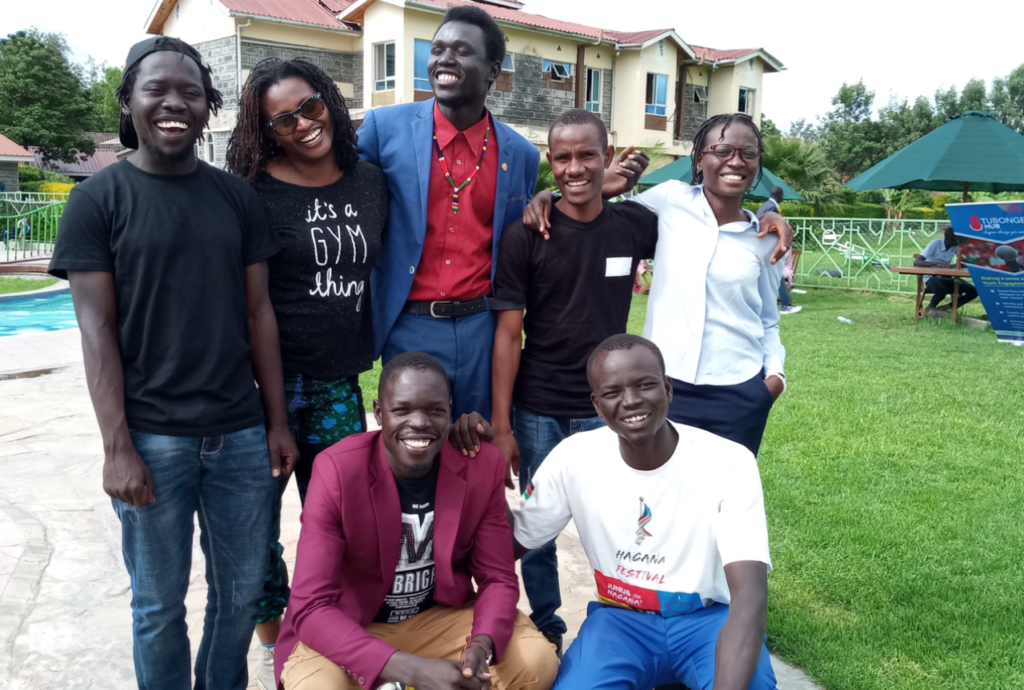 The Access To Skills and Knowledge as a Weapon of Peace

He wasn’t raised in a wealthy household. His home town has been destroyed twice. He lost both parents as a child. Life has been very tough, he admits, but when he tells his story, there is no gloom in his eyes. In spite of his uneven path through life, Bior Ajang believes he is one of the lucky ones. He was born in a refugee camp in Kenya. When his parents passed away at the age of 5, his aunt decided to raise him. He almost dropped out of school to join the army, where he had some friends. His aunt, who became a mother for him, would take him back to the right path: “She was this kind of woman who saw a future in someone like me. She has been the greatest driver in my life, I could have lost my way many times.”

During his time in school, Bior became an actor. He would use drama and comedy to heal his traumas. When he finished school, his aunt wanted to bear the costs of his university tuition, but he felt the need to build something for himself. He recalled how comedy became a channel to embrace his pain, and he wondered how he could use this art to help others heal their wounds. Bior moved back to his hometown, Bor, one of the most affected by the South Sudanese war, 200 km north of Juba. He joined other actors and founded Jongleira Comedy Group.

He then realized comedy was just one tool out of many to carry out his mission. “There are people in the community who are capable of doing something but they don’t know it yet. They just need the support of someone who has passed through that struggle. Because when you understand what life is about, you understand how you can tackle life’s challenges. It is not that because you have lost your parents, like I did, this is the end of me, the end of life, or because someone has mistreated you. That is not the end, you can choose another way.”

He soon found his way. In 2017, he founded ATAKA-HUB, a community based youth led innovation hub that is addressing conflict and youth unemployment in Bor town through capacity building workshops and cultural events. They promote peace with workshops on hate speech mitigation, comedy theater and gender equality awareness, and support youth self-employment through open tech and repairing skills workshops. ATAKA-HUB is part of a larger network of six community based youth-led innovation hubs in South Sudan, Uganda and Kenya called #ASKnet. They provide access to skills and knowledge to a chain of trainers (ToT) to address specific challenges their communities are facing, such as youth unemployment, school dropouts and gender based violence, and to transform cultural patterns that fuel conflict and inequality.

#ASKnet challenges the binary narrative most commonly used by the mass media to approach refugees and IDPs. The media of the left insist: victims. The media of the right blame: criminals. A closer look: humans. With struggle and pain, but also with hopes and agency. Bior Ajang and other members of #ASKnet have become refugees and IDPs as a by-product of conflicts they haven’t initiated. They are on the move, they are chameleons in difficult and ever-changing scenarios, but they haven’t lost hope. And even though they know what it means to experience hardship daily, many have found the strength to change their lives and the lives of others, finding their way as social innovators.

For Bior, it all started with a phone call. A good friend, Jaiksana Soro, invited him to take part in the #peacehackcamp. The overarching theme of the #peacehackcamp was ‘open ICTs, Open Educational Resources (OERs) and media literacy as vehicles for peacebuilding, development and national reconciliation’, for which several hundred participants from East Africa and mentors from the Global Innovation Gathering met in Juba. They worked collaboratively in workshops that combined low and high tech efforts to develop open source solutions to South Sudanese issues.

The independent group of young designers, film makers, IT professionals and artists behind Kapital Movie, one of the main initiators of the #peacehackcamp, together with the r0g_agency and icebauhaus, had been implementing a community-based media training center, Juba’s Open Knowledge and Innovation Hub (j–HUB), since August of the same year. The #peacehackcamp was the first major public activity of the j-HUB community, which embarked on a mission to provide an open forum to discuss, identify and develop solutions for South Sudan’s post-conflict challenges.

However, conflict relapsed again at the end of 2016 and the j-HUB community scattered in numerous locations, some of them becoming refugees in northern Uganda and other regions in South Sudan. “After the #peacehackcamp, I went back to Bor and once I was there, I thought: So now I have the skills, am I going to stay like that? What if people could need my help? That is how I came up with the idea of creating a community based organization that could actually help others just like I was helped. This is how ATAKA-HUB was born.”

Of all the youth who had to surrender the dream of developing jHUB because of the conflict, Bior wasn’t the only one who came up with such an idea. This is how the j-HUB community evolved into a mesh of small nodes and local initiatives. The r0g_agency and hive colab started supporting these initiatives with a capacity building and hub development program. Being these organizations the first to use #ASKotec (Access to Skills and Knowledge open tech emergency case) in post-conflict regions, they named them #ASKnet (Access to Skills and Knowledge Network).

The first to start was Eva Yayi, together with her colleague Yine Yenki, founding GoGirls ICT in 2015. This women-led organization is mentoring school girls and young women in Juba around life skills like public speaking and creative thinking and on topics related to STEAM (Science, Technology, Engineering, Art and Mathematics). Eva and Yine became aware of the digital divide affecting girls and women in South Sudan. Lacking ICT skills are a challenge for education, starting new businesses, selling products to new markets, finding better jobs or gaining access to health and financial services. They have been working to address gender inequality in their communities by providing access to ICT skills and knowledge to girls, boys and women in primary and secondary schools, in the University of Juba and in different communities in South Sudan.

In Juba, Emmanuel Lobijo initiated Junub Open Space in 2016, aiming to support youth empowerment and innovation culture in South Sudan through capacity building workshops in media production, peacebuilding, entrepreneurship and open source software and hardware using #ASKotec. JunubOS, as well as ATAKA-HUB, also use the Bitcoin cryptocurrency #eatBCH to collect donations and provide food regularly to the most vulnerable members of the community, especially orphans and the elders.

In the district of Adjumani, in Uganda, Vuga William came up with the idea to create Youth Empowerment Foundation (YEF) in 2017 to address community issues like unemployment and gender based violence by training youth in open tech, entrepreneurship, peacebuilding and attitude change. The large presence of refugees in the area has caused many tensions within the host community, which now has to share its resources. Vuga believes that “the youth responsibility towards their communities, environment and peaceful coexistence with neighbors can be achieved through many ways, among them business skills, which makes them self-reliant.”

In the Rhino refugee settlement in northern Uganda, Bior’s friend Jaiksana, together with a group of young South Sudanese, founded Platform Africa in 2018. One of the founders, Romeo Lomora, recalls the scenario he encountered when he fled to Uganda in 2016: “It was just a camp. Everything is so limited. There were all this high unemployment levels, the youth became frustrated, there were high levels of trauma, we saw a drop down of morality, drugs, prostitution… The whole scenario didn’t look good.”

They initiated Platform Africa to engage and empower the refugee communities through the media, trauma healing programs, education and technology, and to nurture a peaceful coexistence between refugees and the host community in Arua. “We thought: we are not a big body that could start changing people’s lives, but every change in somebody’s life begins with the small things you do for them.”

The last to start is ASKlab, based in Nakuru, Kenya. Adam Abdulmalik converted his small welding workshop into a local open hardware and production lab in 2019. Being aware that the youth unemployment rate stands very high in his community, Adam, together with his friend Yahya Salim, decided to open the innovation hub to the whole community and address youth unemployment with skills training in the arts, technology, entrepreneurship and vocational skills like welding.

Even though the innovation hubs haven’t existed for long, they are already creating impact. Romeo Lomora, from Platform Africa, has a favorite success story. There was a guy in the refugee settlement, a musician and social media influencer who would spread rumors and fuel hate speech on social media and could incite violence very easily. Platform Africa called that guy, made them their friend and invited him to a #Defyhatenow training in which they showcased how rumors can fuel conflict.

“We allowed them to record a song. He had to use the great talent he has been using to produce hate songs to record a peace song. The artists came together and he recorded a perfect verse. He then said: I think it is enough for all this division. It is time for us to come together. He remained singing peace songs and currently even collaborates with other musicians and peacebuilders and has become a peace activist. He is a cultural activist and has become a great resource that is being booked in refugee camps. He is now using his influence for peace. This is a great success story.”

However, the entrepreneurs know that creating impact on a large-scale is a very slow process, that changing deeply embedded social norms might take time. In spite of this, they decided to stay. Bior had the opportunity to go to Germany. When he went back, people kept telling him he was crazy, he should have fought hard to stay. But he doesn’t see how he could contribute to change his country if he wasn’t there.

“We understand the world has been closed for most Africans. There are opportunities you can get outside that you can’t get in Africa. There is nothing we can do about it, but to create our own opportunities for our own Africans. Many people are dying every day trying to reach Europe. What about creating what they want in Europe in Africa instead? We have everything we need to build a life here. That needs a lot of work, but that is what I can tell our African leaders: let’s try to unite people and see how we can change everything for our youth so that they don’t go look for it outside, but find it within Africa.”