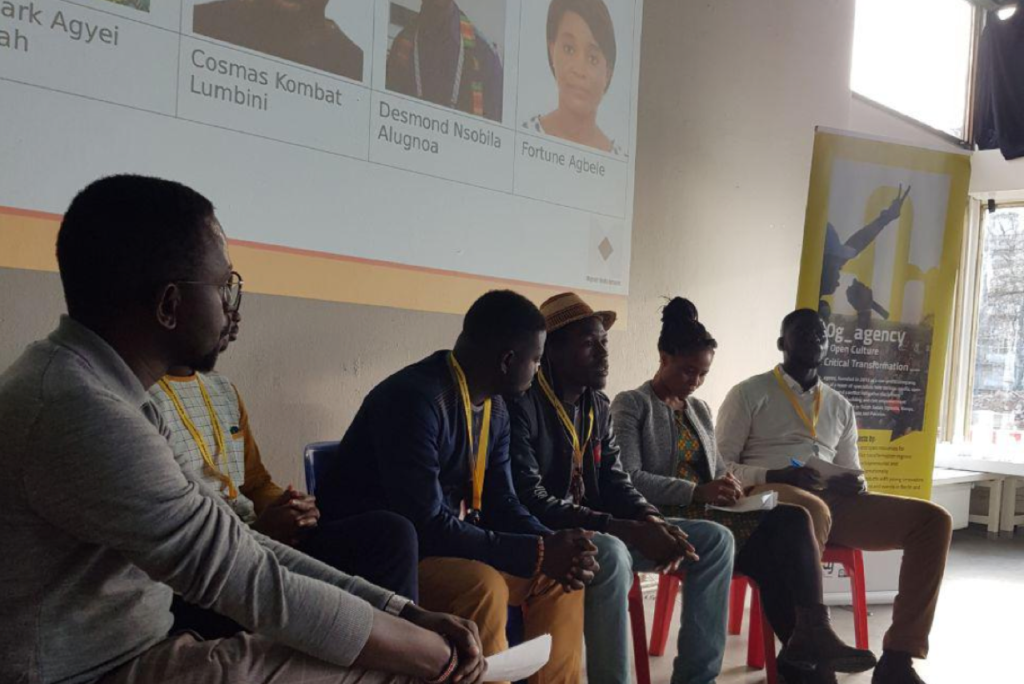 Migrant Media Network 2019 ended with a public presentation of the project, at the Haus der Statistik on December 13th. #MMN trainee and political scientist at the University of Bayreuth, Fortune Agbele, opened the event with a keynote talk. She highlighted the need for policy-makers and politicians to apply multiple and evidence-based sustainable solutions to tackle global migration, going beyond the current one-sided interventions, which are largely focused on building barriers to impede the entry of migrant Africans to Europe.

In this regard, she applauded how the Migrant Media Network is approaching the global migration issue: “The project, which has so far been piloted in Ghana, does not only seek to create an awareness of the dangers that come to taking the irregular route to Europe but also seeks to highlight the opportunities in the home countries. And of particular relevance to the social media boom, it seeks to provide young Africans with reliable information not only on safer options to migrate to Europe but also on the need to scrutinize some of the false images shared on social media about life in Europe.”

After the keynote talk, the initiators of #MMN showcased the different information resources and open technologies that have been co-created with members of the Ghanaian diaspora based in Berlin, during a series of workshops that took place in Berlin at the beginning of the project. These include the raspberry Pi powered HyracBox offline server, a migrant information and entrepreneurship oriented USSD system, along with a comprehensive hard copy and digital #MMN Field Guide for trainers and community leaders.

The event closed with a panel discussion with the returned trainers, in which they reported about their experiences in running social media skills, migration and entrepreneurship workshops in their home communities in Ghana and talked about their personal stories as migrants in Germany. The trainers shared with the audience a surprising impact their workshops had on most participating school boys and girls during their time in Ghana. Whereas at the beginning of the training most participants considered migrating to Europe or the US in the near future -some were already in contact with a travel agent-, the figures reversed after the workshops. Most youth became critical about migrating to Europe irregularly and many considered taking a new path in life as social entrepreneurs in their home towns.

“Participants became much aware of the dangers of irregular migration routes and associated risks on getting documentation in Germany. They also identified alternative economic activities to migrating to Germany such as small-scale farming, fishing, livestock rearing and petty trade, among others, and were interested in how to access the needed funds to start-up in their local communities.” reported trainer Cosmas Combat.

With this valuable insight, Migrant Media Network 2020 will have the potential to enhance these impact by supporting young people in Ghana access the skills, information, mentoring and resources they need in the long term to turn their ideas into businesses, to be job-creators instead of job-seekers, and to empower the younger generations with a ‘making culture’.