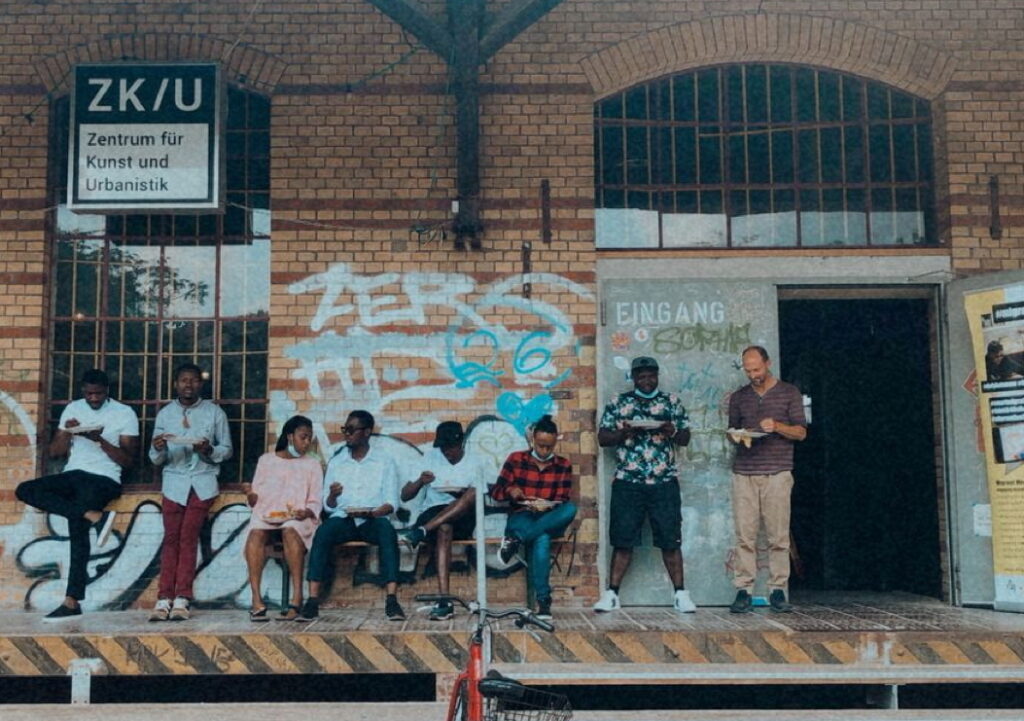 What is a migrant was one of many topics discussed at the Training of Trainers workshop organised by Migrant Media Network (#MMN) on 17-21 August.

#MMN is one of many projects of r0g_agency, a Berlin-based agency for open culture and critical transformation made up of specialists from various disciplines and financed by the German Foreign Office. r0g_ has regional representation in Ghana, Kenya, South Sudan, Cameroon, Pakistan and Ethiopia.

The West African nation was of particular focus in this #MMN workshop with seven members of the Ghanaian diaspora among the 11 participants and organizers over five days. Among them were three Ghanaians who took part in a similar training last year and carried out sensitization seminars in Ghana as well.  Citizens of Cameroon, Egypt, Ethiopia and Kenya also took part by leading or documenting the week’s activities.

The five days held at the ZKU (Zentrum for Kunst und Urbanistik) in Moabit generated significant insight and discussion among participants, beginning with the first presentation: What is a migrant?

Is it anyone who moves? Is it only those who travel by sea in a crowded boat? Is it always voluntary? What cannot be argued is that migration is global and continuous throughout human history. Migration includes those who flee conflict and those free to pursue a career or education in a country different from their own. It is rural to urban, and in times of Covid, it is gradually becoming urban to rural as people seek the literal “greener pasture” of fewer people and more nature. Migration is climate change-driven and it is seasonal as in the migrant farm workers around the world.

Moving can be forced or can be chosen, but the underlying theme of the #MMN workshop was to be properly informed. In a world of misinformation and misleading social messaging, with formal and informal news sources abound across social media networks, finding and interpreting verified information is vital.

Mainstream media often portrays intercontinental migration from Africa to Europe in terrifying photos of capsized boats or rescue operations in the Mediterranean. Mothers, children and young single men stuffed like sardines in boats across open waters. Participants were asked, Which word comes to mind when you see such a photo? Fear. Risk. Regret. Danger. Death. One participant said fun. Sounds insensitive but there’s some truth to it for an uneducated teenager, for example, from an isolated rural community who sees water and a crowd of people. Intrigue plus misinformation on top of desperation can be a fatal mix.

The #MMN workshop emphasized that the purpose was not to discourage migration but to understand migration. That means digging through a plethora of generalizations that gloss over migration to uncover what’s actually happening. One example: more people move within Africa than from Africa to Europe. According to the African Union, 80% of African migrants do not leave the continent.

The workshop topics went into the types of migration: step migration, return, seasonal, impelled, circular. Population transfer, push and pull factors. Contrary to wide opinion, it is not just push or pull impulses, but more often a combination of the two, further propelled by environmental, political, economic or cultural calamity.

The diaspora plays a crucial role, most notably in sending remittances back to their home countries. To which one must ask: Are they stabilizing the nation of origin or praising the country of destination? Remittances are a form of counter-migration in a monetary way. One argument is the lack of “sexy opportunities” in rural areas. It’s time to make agriculture cool. Rural residents consistently make the move to urban areas, resulting in overcrowded cities of wealthy haves and poverty-stricken have-nots. Instead, many farmhands are fed lies to believe any other area is better than where they live.

The week was meant to initiate uncomfortable conversations. While not discouraging migration, significant danger awaits those who pursue irregular migration, often upheld by false praises of the European lifestyle. Eat at McDonald’s, wear Adidas, it’s easy to obtain a visa, a job awaits, marriage to a local woman happens with a month. Myth. Myth. Myth. All of them. Through social media, these rumors circulate with greater frequency and velocity. When they reach the already desperate individual seeking greener pastures, it can prove harmful.

The result of the workshop did not come to any grand conclusions. Conversations don’t always result in conclusions. It started with theory and then fostered creative impulses to mimic the persona of a migrant – Joy or George. Workshop participants played out scenarios of a migrant’s decision-making amidst many options. Terms like goro boy and bushfaller were introduced to understand the lexicon of the migrant experience. The names may differ between African regions. Goro boy, often heard in Ghana, for example, is essentially a travel agent who leads or mis-leads you abroad and across borders. Bushfaller is used in Cameroon to described the person who has “fallen into the bush,” often bestowed with honor or envy on the one who has made a life abroad.

Creativity flowed through the last two days of the week with prototypes for board games and card games. In due time, sensitizations workshops will be held in rural communities in Ghana by way of church, school or traditional meetings to inform the residents. That was the purpose of the workshop: a network for potential migrants by migrants through the channel they know best in this day in age – social media. In a larger sense, it is about creating a migrant mentorship to infiltrate the existing informal connections not always sharing true information.

After five days, it felt a long time since the workshop began on the question: What is a Migrant?

If there is one conclusion: We are all migrants. And for all us, verified information is vital.

Nicholas Bruce is a Berlin-based journalist and volunteer who covers international sporting events and community development. He believes strongly in changing the narrative as a journalist and lending a hand to vulnerable people as a volunteer.