Raising awareness of and develop means to mitigate social media based hate speech, conflict rhetoric and online incitement to violence

#defyhatenow is a grassroots community peacebuilding, training and conflict reconciliation project aiming to strengthen the voices and support the actions of peace & youth oriented civil society organisations.
It aims to raise awareness of and develop means to mitigate social media based hate speech, conflict rhetoric and online incitement to violence.

#defyhatenow seeks to support those voices acting against the conflict to go ‘viral’ within and outside the country – also bringing the Diaspora into the online peace building framework, bridging gaps of knowledge and awareness of social media mechanisms between those with access to technology and those without.

Initiated in early 2014, and supported from 2015 through 2018 by means of the German Federal Foreign Office via the ifa/zivik programme, r0g_agency conducted the project: ‘Mobilising Civic Action Against Hate Speech and Directed Social Media Incitement to Violence in South Sudan’ and its neighbouring countries Kenya, Uganda and Sudan. Alongside (social) media literacy trainings and community level facilitation of hate speech and conflict mitigation activities, the project produced a comprehensive ‘Social Media Hate Speech Mitigation Field Guide’.

In 2019 a #defyhatenow Community Based Organisation has been legally registered in South Sudan, while further crisis intervention initiatives have been introduced in Cameroon and Ethiopia. 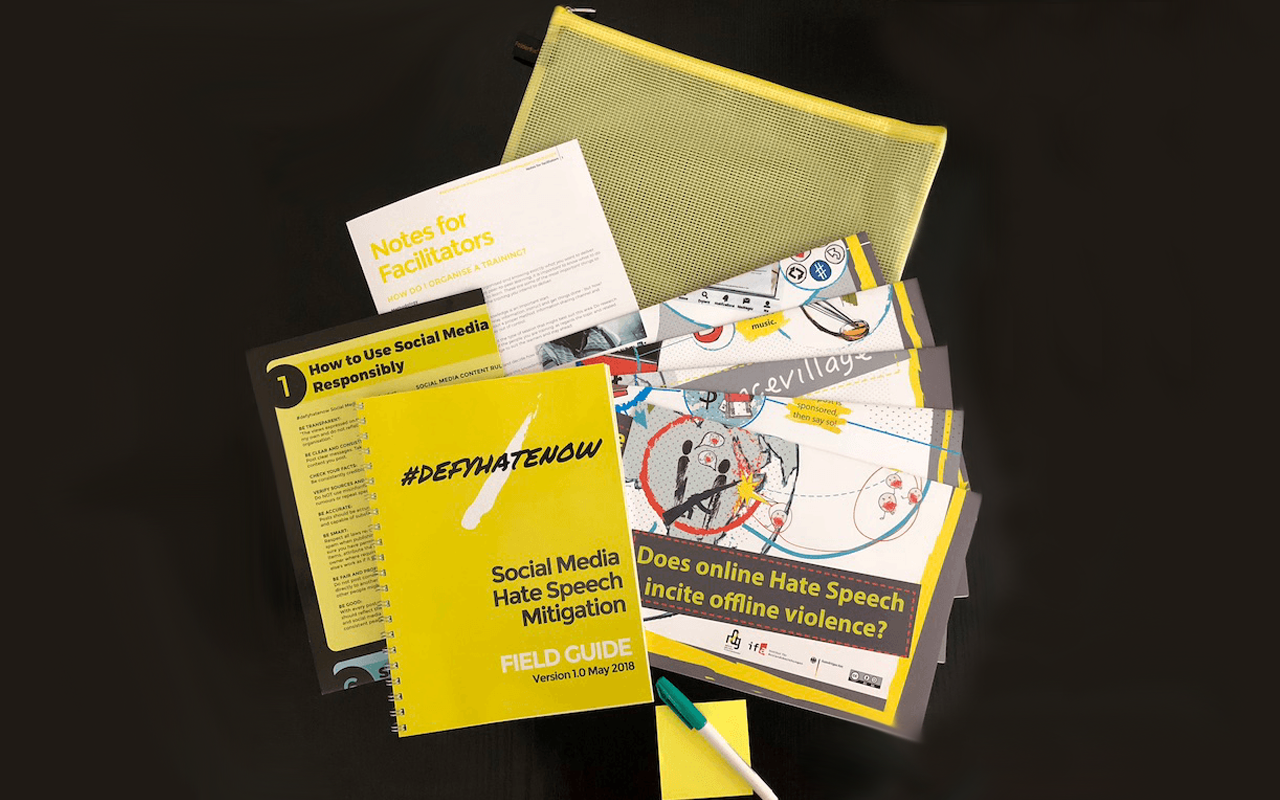 The #defyhatenow Field Guide offers tools and strategies to be used by community -based organisations & online campaigns for peacebuilding in South Sudan, Cameroon and around the world.

One Africa 2, By Mac Alunge

There is no enemy We own our own our own remedy We make up one body, we are one family Soldiers in the same army ‘Enemy’, a blind invention of humanity Designed to distract us from harmony Causing division, pain and misery Obstructing the anatomy of our economy But if we do have an enemy…

Why dictionaries have to go through changes: A short excursion into the philosophy of language

Whenever new words are added to the Duden, probably the best-known dictionary in Germany, controversial discussions tend to come up in no time. A short excursion into the philosophy of language not only reveals the ambiguous character of language but also illustrates the important role dictionaries play in society. The mutability of the German languageLanguages…

Common Measures to Stop the Spread of Corona Virus Wash your hands (20 seconds) with soap and potable water Avoid touching your eyes, nose and mouth Use a hand sanitizer / hydro-alcoholic gel when you’re out Maintain social distance – at least 1.5 metres Don’t hug, kiss or shake hands when you meet Use a…

Juba, 27th November 2018 – We cordially invite you to attend the #defyhatenow end-of-your-events in Juba and various locations in Uganda, Kenya, Sudan and Egypt to celebrate the achievements made in social media hate speech mitigation since 2014. [Download the official press release End-of-Year Event 2018]   Over the past four years #defyhatenow and its partners has…

How can social media literacy accelerate peacebuilding efforts in post-conflict regions like South Sudan? Discuss with us on Tuesday, Oct 23, 2018 from 5pm. Presentations start at 6pm.   Two of our colleagues from the #defyhatenow project, nominated as Peace Ambassadors to attend the One Young World Summit in The Hague will be joining us in Berlin.…

Download the PDF Version of this press release. Juba September 15, 2018 – #defyhatenow is proud to coordinate the international social media #PeaceJam18 for UN World #PeaceDay on September 21st 2018 with the theme: Peace for all. We aim to connect South Sudanese and peace jammers around the world on UN World #PeaceDay to increase…

The impact of social media on peace, and how to turn the tide   This article was originally published on frient-peacebuilding-forum.de/../frient-peace-building-forum-2018/…   Overview The worldwide spread of social media both opens new horizons and poses new challenges to peacebuilders. Social media platforms contribute to freedom of speech. Even so, the filter bubbles they create can also…

Between hate and hope

Lessons from Kenya on hate speech and political manipulation originally published at furtherfield.org/review-of-the-hate-news-conference The conference began with Jo Havemann presenting #DefyHateNow, a campaign by r0g_agency for open culture and critical transformation, a community peace-building initiative aimed at combating online hate speech and mitigating incitement to offline violence in South Sudan. More than ten years ago the…

A peacetech approach to mitigate mass violence in South Sudan

This article was originally published on  frient-peacebuilding-forum.de/pbf-voices-blog/…   How can technologies and digital media be strategically used to achieve conflict-resolution and peacebuilding objectives? To answer this question, peacetech is a growing field that allows peace advocates and local communities to develop new forms of engagement. The term peacetech thereby refers to two different approaches: 1) Utilizing existing online/social…

#defyhatenow at the Social Media Conference in Kampala, Uganda

The UGANDA SOCIAL MEDIA CONFERENCE 2018 had its focus on: DEMOCRACY AND CIVIC ENGAGEMENT IN THE AGE OF DIGITAL (DIS) INFORMATION CONFERENCE BACKGROUND The Uganda Social Media Conference is an annual programme organized by the Uganda country office of the Konrad-Adenauer-Stiftung (KAS) which aims to bring together key stakeholders from government, civil society, academia and…

With a range of exciting events happening these days in Berlin we are very happy to welcome three of our colleagues from South Sudan. The founders of the #Go Girls ICT Initiative Yine Yenki and Eva Yayi as well as Bior Jaden attended the annual Global Innovation Gathering, presented at this year’s 12th edition of…

Raising awareness on the misuse of Social Media

Download the PDF Version of this press release   Juba, 6th April 2018: #ThinkB4UClick (Think Before You Click) is an awareness campaign that aims at pointing out the dangers of misinformation, fake news and hate speech with a focus on South Sudan. Over a period of one month, we aim to discuss with the public the…

#RhinoTalks, brought together different actors and relevant stakeholders from South Sudanese NGOs in Uganda, Journalists and refugee settlements leaders with the aim of sharing / developing of strategies for mitigating the occurrence of hate rhetoric among south Sudanese asylum seeking communities in Uganda.

The new #Peace4ALL music video from the #PeaceVillage in collaboration with #defyhatenow takes place Tuesday March 28th 2017 at 6pm.   More information at www.defyhatenow.net

Wikipedia Peace Sprint Within the #defyhatenow initiative we were training students from the University of Juba on writing and editing information about South Sudan on Wikipedia, the online global encyclopedia from 6-9 November 2017. Read the #defyhatenow press release (PDF)   Objectives Empowering South Sudanese to have a global voice in national narratives and knowledge in…

Constructed and Open Identities in the Fog of War and Peace

Socio-Political and Historical Context of Hate-Speech in South Sudan | by Roman Deckert.   The people of South Sudan have been suffering from one of the gravest humanitarian crisis since major armed conflicts erupted in 2013. About 2 million have been internally displaced, while more than 1.5 million fled to neighbouring countries, mainly Uganda, Kenia…

Using Wikipedia to #defyhatenow in Wau, South Sudan. The #defyhatenow team held a Wikipedia peace agents workshop in Wau.   Wau Wikipedia Peace Agents #defyhatenow 15-16th December Wikipedia was searched to get an initial overview of information about South Sudan, what languages are being used and for things that are particularly interesting to promote peace, unity…

Join us for a special evening with our guest Prof. Leben Nelson Moro from the Center for Peace and Development Studies, University of Juba, South Sudan. At a time framed by the extremes of humanitarian crisis, immense pressures on equitable development and great uncertainty in its future political path South Sudan: #DeepDive is a unique… 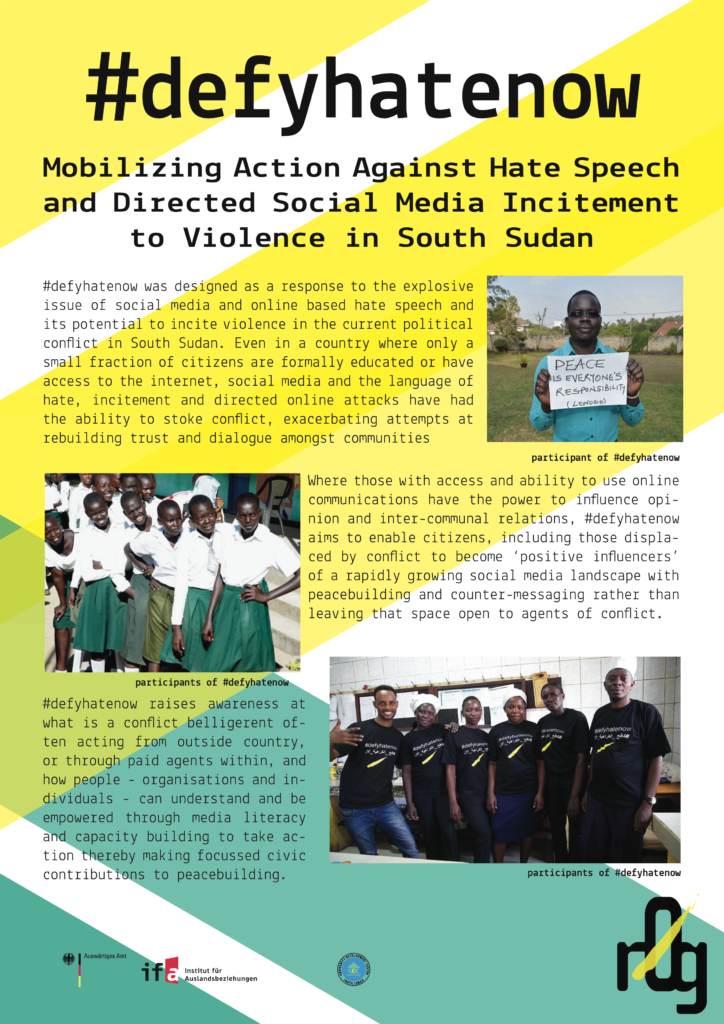 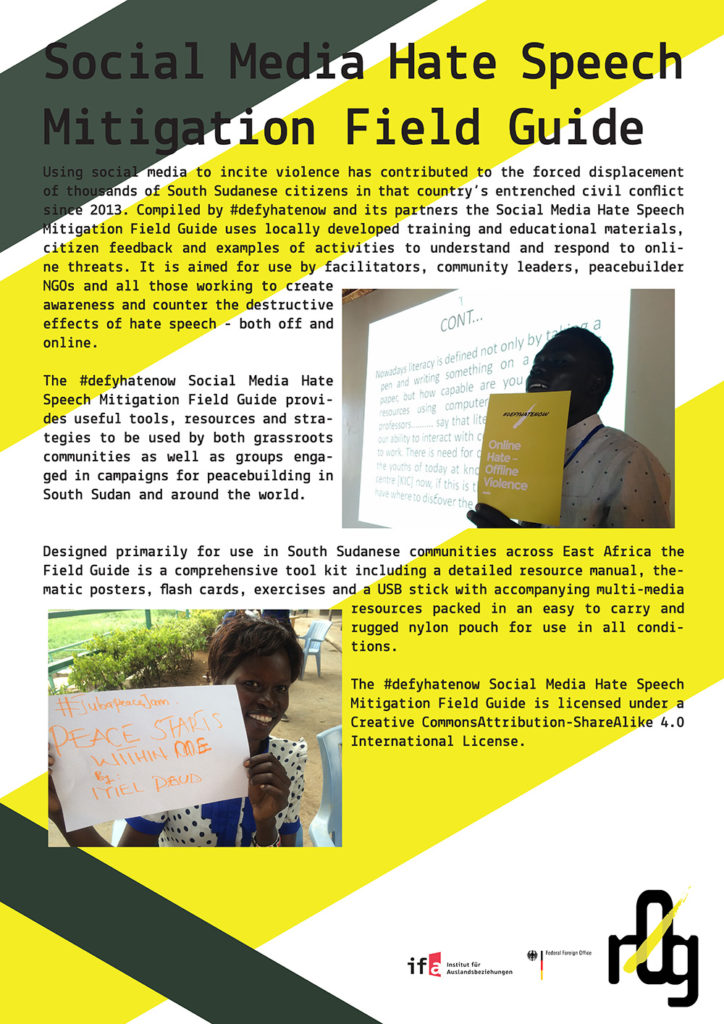 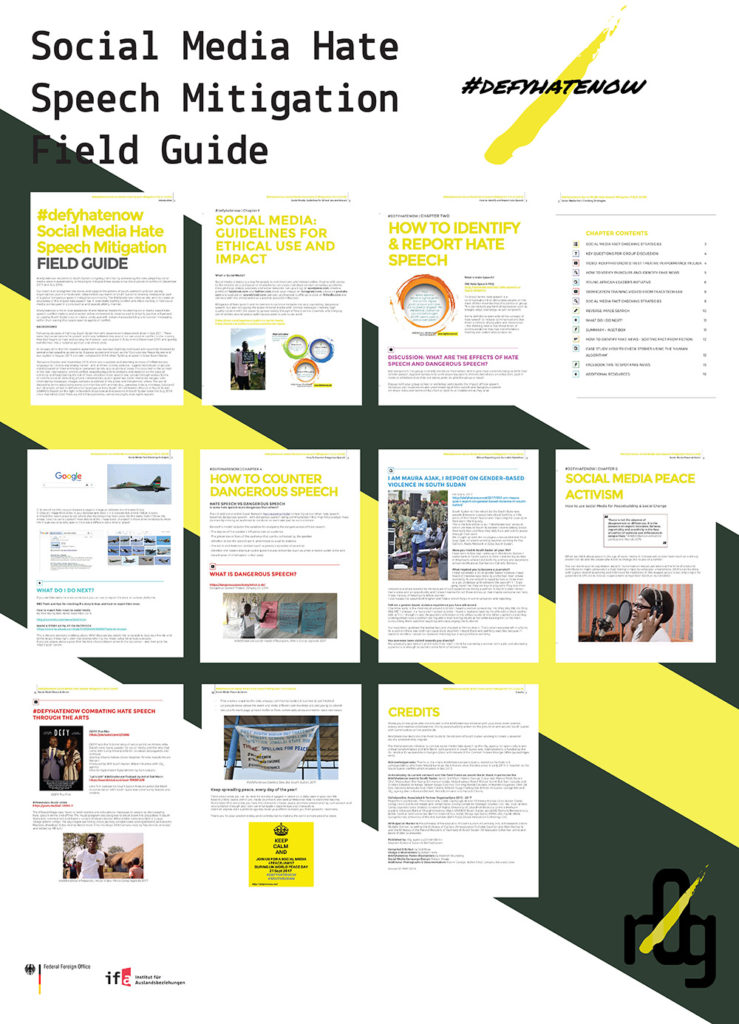 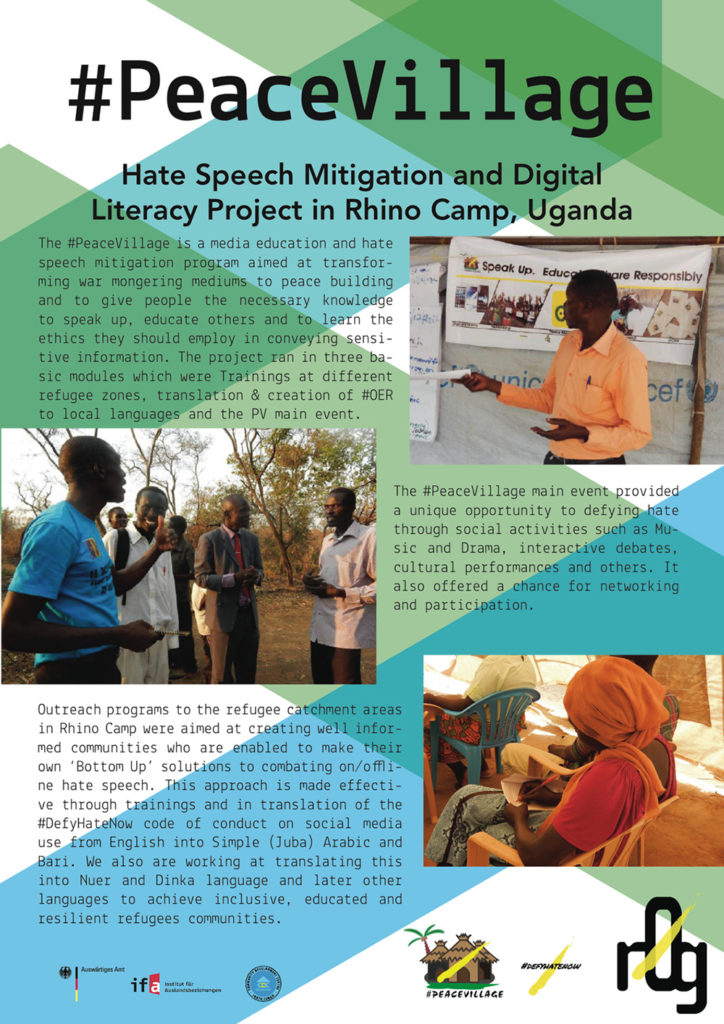 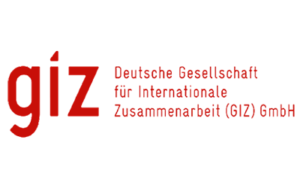 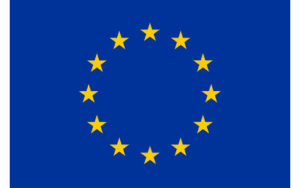 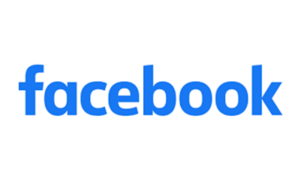 defyhatenow.org
We use cookies on our website to give you the most relevant experience by remembering your preferences and repeat visits. By clicking “Accept”, you consent to the use of ALL the cookies.
Cookie settingsACCEPT
Manage consent