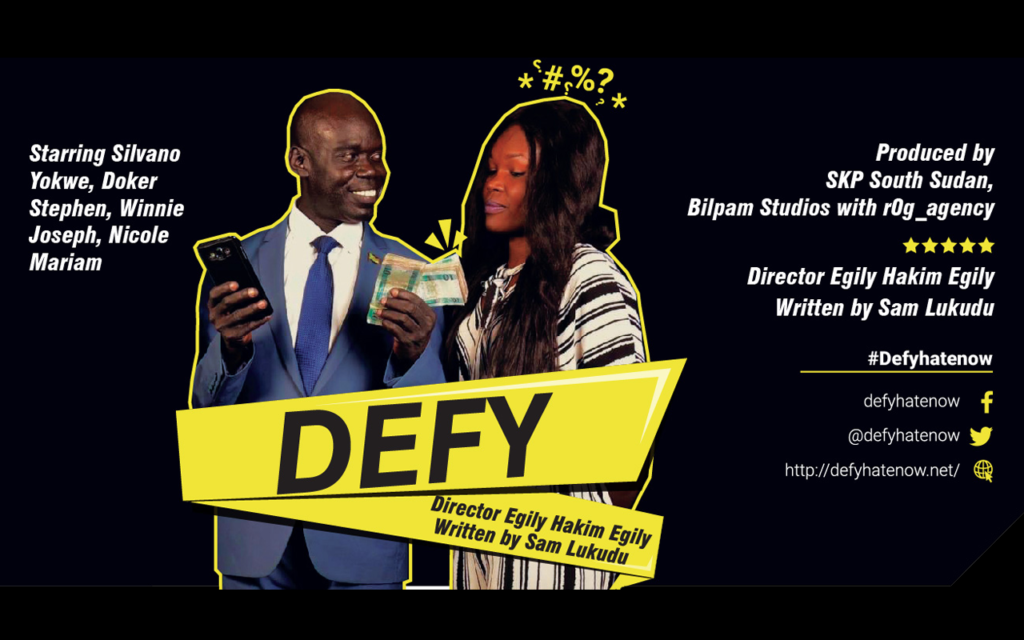 Combating hate speech through the Arts

Juba, 26th February 2018. – The community peace building initiative #defyhatenow is proud to announce the launch of DEFY – a short film on the perils of social media misuse. The film will premiere at Logali House on Thursday, 1st March 2018 at 6pm. DEFY tells the fictional story of the fictional senior politician Honourable David’s newfound passion for social media and the risks that come with using these platforms to spread propaganda and rumours. The film follows the fate of the young internet entrepreneur ‘Software’ and his colleagues who become entangled in a dangerous online conflict with Honourable David as he hires a young female manager for his social media page. After Hon. David posts inflammatory views on his Facebook page he ends up risking his life and that of the young woman.

DEFY shows an extreme yet potential example of how the misuse of social media can go spectacularly awry, indicating that hate speech has no place in our political life, our neighbourhoods and workplaces. The film aims to raise awareness and facilitate dialogue about how we can work together in our communities to address these risks and mitigate further incitement to violence arising through online hate speech.

The people of South Sudan, the world’s youngest nation, share the rest of the world’s interest in social media, but with one difference: Some South Sudanese within the country and in the diaspora have directed digital tools to incite violence along ethnic lines in the nation’s three-and-a-half-year-old civil war by posting hate speech that may have in one way or another fueled the conflict. #defyhatenow responds to create awareness of the impact of hate speech in fueling conflict and how social media can be used in a constructive and peace-building manner.

Supported by the German zivik programme of ifa (Institute for Foreign Cultural Relations) and managed by r0g_agency for open culture and critical transformation, #defyhatenow is an urgent community peacebuilding initiative aimed at combating online hate speech and mitigating incitement to offline violence in South Sudan. Since the inauguration of the initiative in 2015, #defyhatenow staff has provided extensive trainings, workshops, sports events and music concerts to raise awareness on the impact of hate speech online and offline, thereby bringing together grassroots organizations and youth groups in South Sudan and the diaspora.