Beyond Irregular Migration: #MMN and a Migrant‘s Perspective on How to Find Solutions to Challenges - r0g agency Skip to content 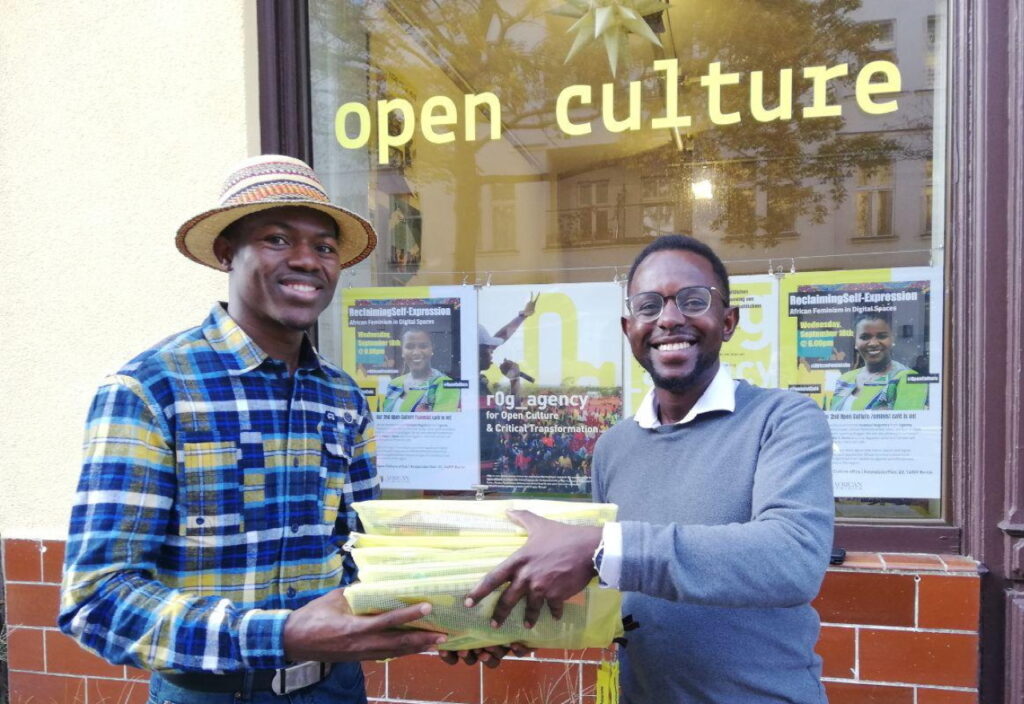 Desmond Alugnoa understands very well why many young people in Ghana are embarking on a dangerous journey to Europe searching for a better future. A couple of years ago, he also considered crossing the desert to Italy. Like most of his fellow students, when he finished high school he had no professional experience, couldn’t find a job and friends and strangers constantly tried to convince him that going to Europe was the best option to succeed in life.

The first time I met Desmond, he entered the Open Culture office wearing a raincoat made of waste materials. He had recently moved to Berlin and heard a new project called the Migrant Media Network was recruiting Ghanaians based in Berlin to conduct workshops in rural Ghana. He became one of the 5 Migrant Media Network trainers, who have been trained and involved in the development of online and offline materials, such as the Migrant Media Network Field Guide, to conduct workshops for young girls and boys in rural regions of Ghana around questions of migration, human smuggling, the ethical use of social media and youth entrepreneurship. #MMN was launched in April 2019 as a response to the growing dangers and misinformation faced by migrants when embarking on a journey to Europe through irregular or back-door means.

The Migrant Media Network gave a public presentation hosted by the Haus der Statistik in Berlin on December 13th. The initiators showcased the different information resources and open technologies that have been used during the workshops in Ghana. These include the raspberry Pi powered HyracBox offline server, a migrant information and entrepreneurship oriented USSD system, along with a comprehensive hard copy and digital #MMN Field Guide for trainers and community leaders. The returned trainers reported about their experiences in running social media skills, migration and entrepreneurship workshops in their home communities in Ghana and talked about their personal stories as migrants in Germany.

For Desmond, coming to Europe safely has been a very long way. As for most young people in Ghana, the information he had about Europe didn’t come from official sources, he mostly relied on social media. “The stories that dominate on social media are dangerous because they paint a solely positive picture of Western countries and let people think that Europe is a paradise in which anyone can become rich without effort.” Even though he was desperate to succeed, he was very critical every time he received offers to be taken to Europe and would always ask himself questions like “Can I trace the source of information?” or “What could that person be gaining from the offer?”

Rumours and misinformation are principally spread by human smugglers, the diaspora and returnees through social media. Enabling informed migration choices in Ghana is very difficult. First, using Internet is very expensive, whereby finding trustworthy information on migration is difficult and costly, especially in rural areas. Second, most migrants don’t rely on official sources of information and inform themselves on social media platforms instead. Lacking digital literacy is also a contributing factor to the pervasive influence of the deliberately misleading information spread by human traffickers.

Desmond postponed his journey and started creating opportunities for himself and other young people in Ghana. In 2014, he co-founded the Green Africa Youth Organization (GAYO), an NGO dedicated to building capacities and providing solutions to pressing environmental issues through youth empowerment and public education in Ghana. His commitment to human rights, environmental sustainability and community development have brought him far. During the last few years, he has been invited to top-level summits and conferences on topics like migration and climate change worldwide. Recently, he was one of the 100 young world leaders to attend the UN Climate Summit in New York.

At the end, he has made it to Europe. Yet, he never crossed the Sahara desert by foot, he traveled to Berlin by plane. DAAD has granted him a scholarship to learn German and study the Master of Public Management: Geo-Governance at the University of Potsdam. He wants to spend some time in Europe sharpening his skills and knowledge to later return to Ghana to transform his country as a politician. His path to Europe has been long and required great effort, he worked on his skills and knowledge and gained valuable professional experience in various fields before taking the big step:

“I tell people that you, first of all, need to know what you can offer, because wherever you are, I really believe there is a potential of you becoming whoever you want to become. No matter the existing limitation of opportunities. And once you identify two or three things you can offer even if it is one, where does the opportunity exist? If they know that you exist and they really need you, it will become very easy. You don’t need to struggle and now there are so many opportunities to make your skill popular, because almost everywhere we have access to social media platforms. For me, that is the only way to actually realize whether you even need to travel to an European country or the US. Once you discover this, you might not even want to travel.”

Engaging the diaspora in bringing awareness to their communities about safe migration options and entrepreneurship back home enables an effective dissemination of truthful information from people young potential migrants can relate to more closely than official sources. The Migrant Media Network trainers are young and are able to educate and advise the youth in Ghana in their own language. Most have even considered migrating irregularly after finishing school but finally have made it successfully to the West choosing safe channels. They speak openly about the challenges they have faced, even though they have migrated regularly through study or work visas.

And perhaps most importantly, they are entrepreneurs, activists, policy makers, educators, they know their country well and are actively engaged in transforming their society and creating opportunities for the youth in Ghana. That gives them the ability to not only dissuade young people in their home countries from migrating irregularly, but to give them tools, skills and knowledge about how they can build economic and social resilience by transforming their problems into opportunities by becoming entrepreneurs.

“The Migrant Media Network workshop offered me new ways to think about local opportunities in my neighborhood and community, this could be farming or raising livestock. After the workshop, I just realized that it is more profitable to stay local than to go abroad for so called greener pastures that will actually never be green. The greener pasture is right here in my Savanna vegetation” explained a participant during a workshop in Ghana.

During the panel discussion held at the Migrant Media Network public presentation, the trainers shared with the public a common experience that surprised them all: whereas at the beginning of the training most participants considered migrating to Europe or the US in the near future -some were already in contact with a travel agent-, after the trainings the figures reversed. Most youth wanted to become entrepreneurs.

“Participants became much aware of the dangers of irregular migration routes and associated risks on getting documentation in Germany. They also identified alternative economic activities to migrating to Germany such as small scale farming, fishing, livestock rearing and petty trade, among others, and were interested in how to access the needed funds to start-up in their local communities.” reported trainer Cosmas Combat.

With this valuable insight, the coming editions of the Migrant Media Network have the potential to enhance their impact by supporting young people in Ghana access the skills, information, mentoring and resources they need in the long term to turn their ideas into businesses, to be job-creators instead of job-seekers, and to empower the younger generations with a ‘making culture’.