Between hate and hope - r0g agency Skip to content 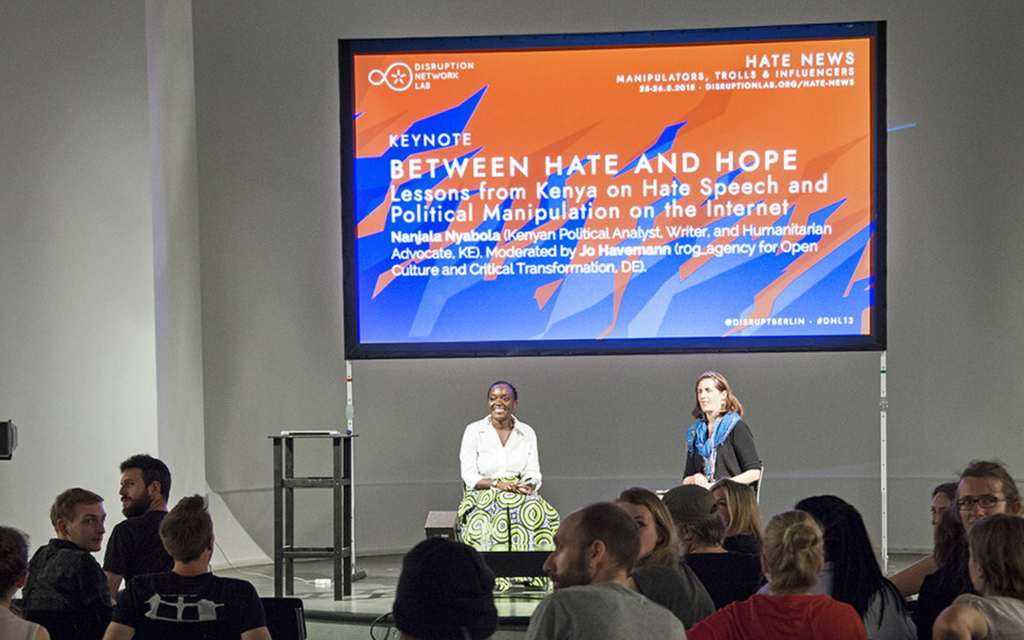 Lessons from Kenya on hate speech and political manipulation 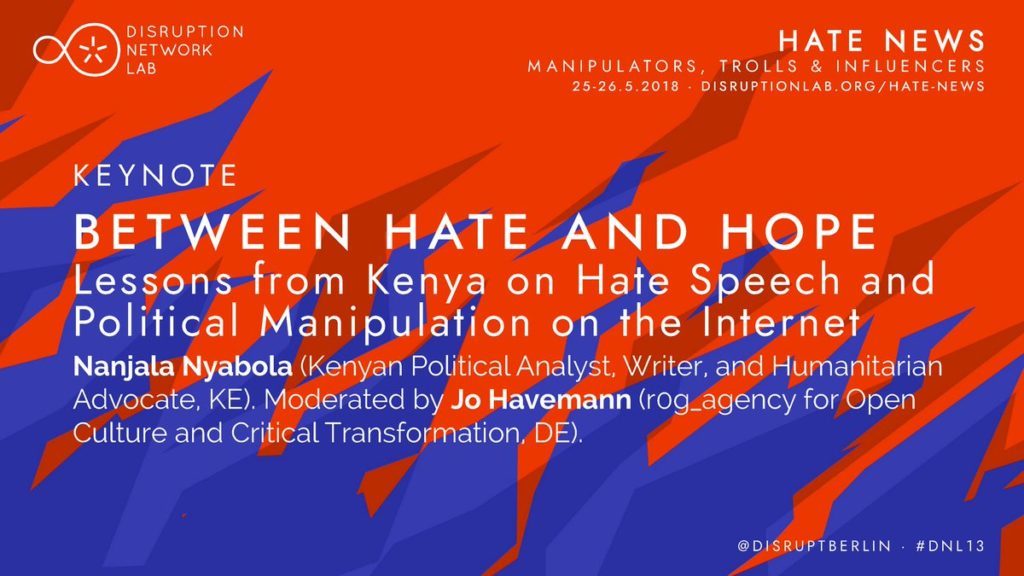 The conference began with Jo Havemann presenting #DefyHateNow, a campaign by r0g_agency for open culture and critical transformation, a community peace-building initiative aimed at combating online hate speech and mitigating incitement to offline violence in South Sudan. More than ten years ago the bulk of African countries’ online ecosystem consisted of just a few millions of users, whilst today’s landscape is far different. This project started as a response to the way social media was used to feed the conflicts that exploded in the country in 2013 and 2016. It is a call to mobilize individuals and communities for civic action against hate speech and social media incitement to violence in South Sudan. Its latest initiative is the music video #Thinkbe4uclick, a new awareness campaign specifically targeted at young people.

In Africa, hate campaigns and manipulation techniques have been causing serious consequences for much longer than a decade. The work of #DefyHateNow counters a global challenge with local solutions, suggesting that what is perceived in Europe and the US as a new problem should instead be considered in its global dimension. This same point of view was suggested by the keynote speaker of the day, Nanjala Nyabola, writer and political analyst based in Nairobi. Focusing on social media and politics in the digital age, the writer described Kenya´s recent history as widely instructive, warning that manipulation and rumours can not only twist or influence election results, but drive conflicts feeding violence too.

The reliance on rumours and fake news was the principle reason that caused the horrifying escalation of violence following the Kenyan 2007 general election. More than 1,000 people were killed and 650,000 displaced in a crisis triggered by accusations of election fraud. The violence that followed unfolded fast, with police use of brutal force against non-violent protesters causing most of the fatalities. The outbreak of violence was largely blamed on ethnic clashes inflamed by hate speech. It consisted of revenge attacks for massacres supposedly carried out against ethnic groups in remote areas of the country. Unverified rumours about facts that had not taken place. Misinformation and hate were broadcast over local vernacular radio stations and with SMS campaigns, inciting the use of violence, animating different groups against one another.

The general election in 2013 was relatively peaceful. However, ethnic tensions continued to grow across the whole country and ethnic driven political intolerance appeared increasingly on social media, used mainly by young Kenyans. Online manipulation and disinformation proliferated on social media again before and after the 2017 general election campaign.

Nyabola explained that nowadays the media industry in Kenya is more lucrative than in most other African regions, which could be considered a positive aspect, suggesting that within Kenya the press is free. Instead a majority media companies depend heavily on government advertising revenue, which in turn is used as leverage by authorities to censor antagonistic coverage. It should be no wonder Kenyans appear to be more reliant on rumours now than in 2007. People are increasingly distrustful of traditional media. The high risk of manipulation by media campaigns and a duopoly de facto on the distribution of news, has led to the use of social media as the principle reliable source of information. It is still too early to have a clear image of the 2017 election in terms of interferences affecting its results, but Nyabola directly experienced how misinformation and manipulation present in social media was a contributing factor feeding ethnic angst.

Rafiki, the innovative Kenyan film presented at the Cannes Film Festival, is now the subject of a controversy over censorship due to its lesbian storyline. Nyabola is one of the African voices expressing the intention to support the distribution of the movie. “As something new and unexpected this movie might make certain people within the country feel uncomfortable” she said, “but it cannot be considered a vehicle for hate, promoting homosexuality in violation of moral values.”  It is actually essential not to confuse actual hate speech with something that is labeled as hate speech for the purpose discredit upon it. Hate speech can be defined as something intended to offend, insult, intimidate, or threaten an individual or group based on an attribute, such as sexual orientation, religion, colour, gender, or disability. The writer from Nairobi reminded the audience that, when we talk about hate speech it is important to focus both on how it makes people feel and what it wants to accomplish. We should always consider that we regulate hate speech since it creates a condition, in which social, political and economic violence is fed, affecting the way we think about groups and individuals (and not just because it is offensive).

Nyabola indicated few key factors that she considers able to increase the consequences of hate speech and manipulation on social media. Firstly, information travels fast and can remain insulated. Whilst Twitter is a highly public space where content and comments flow freely, Facebook is a platform where you connect just with a smaller group of people, mostly friends, and WhatsApp is based on groups limited to a small number of contacts. The smaller the interaction sphere is, the harder it is for fact-checkers to see when and where rumours and hate speech go viral. It is difficult to find and stop them and their impact can be calculated just once they have already spread quickly and widely. Challenges which distinguish offline hate speech and manipulation from online ones are also related to the way information moves today among people supporting each other without a counterpart and without anyone being held to account.

Nowadays Kenya boasts an increasingly technological population, though not all rural areas have as yet been able to benefit from the country being one of the most connected ones in sub-Saharan Africa. In this context, reports indicate that since 2013 the British consulting firm Cambridge Analytica had been working in the country to interfere with elections, organizing conventions, orchestrating campaigns to sway the electorate away from specific candidates. It shall be no surprise that the reach of Cambridge Analytica extended well beyond United Kingdom and USA. In her speech, Nyabola expressed her frustration as she sees that western media focus their attention on developing countries just when they fear a threat of violence coming from there, ignoring that the rest of the world is also a place for innovation and decision making too.

Kenya has one of the highest rates of Internet penetration in Africa with millions of active Kenyan Facebook and Twitter accounts. People using social media are a growing minority and they are learning how to defeat misinformation and manipulation. For them social media can become an instrument for social change. In the period of last year’s election none of the main networks covered news related to female candidates until the campaigns circulating on social media could no longer be ignored. These platforms are now a formidable tool in Kenya used to mobilize civil society to accomplish social, gender and economic equality. This positive look is hindered along the way by the reality of control and manipulation.

Most of the countries globally currently have no effective legal regulation to safeguard their citizens online. The GDPR legislation now in force in the EU obliges publishers and companies to comply with stricter rules within a geographic area when it comes to privacy and data harvesting. In Africa, national institutions are instead weaker, and self-regulation is often left in the hands of private companies. Therefore, citizens are even more vulnerable to manipulation and strategic hate speech. In Kenya, which still doesn’t have an effective data protection law, users have been subject to targeted manipulation. “The effects of such a polluted ecosystem of misinformation has affected and changed personal relationships and lives for good,” said the writer.

On social media, without regulations and control, hatred and discriminations can produce devastating consequences. Kenya is just one of the many countries experiencing this. Hate speech blasted on Facebook at the start of the Rohingya crisis in Myanmar. Nyabola criticized that, as in many other cases, the problem was there for all, but the company was not able to combat the spread of ethnic based discrimination and hate speech.